skip to main | skip to sidebar

*walks into the room, changes the burnt out lights and clears the cobwebs*

Welp. It's been a couple of years... A couple of very busy, very crazy years. Multiple cross country moves and job changes, profound personal life changes, a new baby... lots of things. So many things that I totally forgot I had this Dev Blog!

So let's see if we can't pick up the pieces from where we left off.

So, at some point yesterday evening, I decided to finally get over myself and start studying Japanese. I mean, how hard could it be, right? This isn't my first go at it, but it's certainly my fiercest go of it. It began when I found myself looking at http://www.learn-japanese.info and then spiralled out of control. I've long known the basics of pronunciation and, over my various short lived attempts, managed to pick up a few bits of the grammar and even a handful of words... but on this day, I decided that wasn't enough. Ignoring the site's advice to learn the syllabarys (syllabaries?) Hiragana and Katakana, I jumped right into the lessons available. After all, they do provide the terms in Romaji (Japanese words with English letters), so why not just jump right in?

I got through 12 lessons this way, stopping at prepositions (postpositions?) as it introduced a little too much at once but I felt like I was making real progress. At this point, I started looking around for more learning resources, and found a few useful thing, but all signs seemed to point in one, very scary, direction: Learn Hiragana. Truth told, this hurdle always seemed to be the bridge too far; "There's so many characters", "The symbols are so complicated", "It'll take too much time/effort" my most common excuses. But this time... this time, I was determined and I stumbled on this wonderful post: http://www.tofugu.com/2010/10/13/hiragana-guide/

And The Game Kept A Rollin' All Night Long

Just a quick update since it's been a little while. Progress continues, if a bit slowly over the last few weeks. Between Guild Wars 2, helping out in XNA Chat and general Laziness, not too much has been accomplished but there HAS been progress.

I've added in a few more monster types, cleaned up quite a bit more of the Vita code, added a splash screen and several other minor tweaks under the covers.

Hope to have more soon, maybe even an updated demo! For now, I'll leave you with a couple more screen shots off of the Vita build: 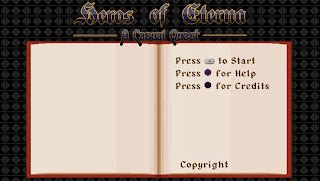 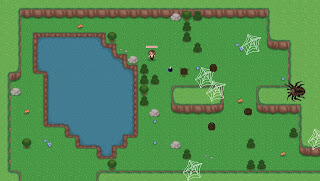 Heroes of Eterna on Vita! This Could Work!

A few weeks back I made a post mentioning the potential for HoE to run on a Vita using MonoGame/PlayStation Mobile, and another outlining some of the issues. Today, I'd like to share that progress on that front has been staggering! After spending a couple of evenings running down some issues, I can proudly report that the game is running at almost full steam on a Vita! 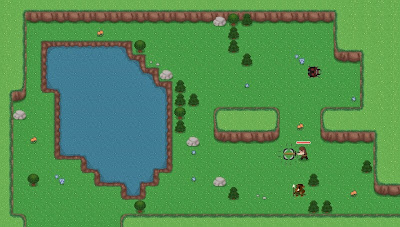 I said I'd post more details about the issues I'd had with the PSM/Monogame port and here they are!

In this post I'm going to try and outline some of the problems I faced when working with the PSM port of MonoGame.

First thing you'll want to do is read over barnard666's post in this thread. It was very helpful in getting set up, and this post assumes you've at least skimmed the numbered items :)

Heroes of Eterna on Vita!?

So I spent a little bit of time this week working to try and get Heroes of Eterna running on a Vita using MonoGame's PSM port. I'd attempted this once before, but ran into trouble with the RakNet references. Since one of my recent changesets was fully removing all of that, I figured I'd have another go of it.

I started with a fun little prototype, TinyGame, and after resolving some content issues, it worked. And, freaking brilliantly: 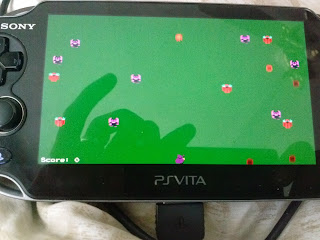 Easily the definitive version of that little prototype.

So, next, it was on to the big fish. And what a fish it was. It took about an hour to get the menu screen up and working, which was pretty neat: 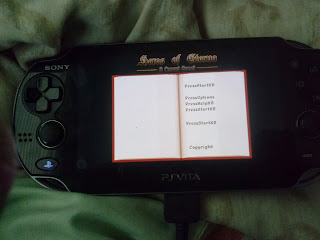 Next was where all the fun began, but I'll try to go over all the little issues I ran into in another post in case it helps someone down the line.

I did eventually get the project running, but it was... Not Ideal™.

The performance was pretty bad, Input has been handled in an interesting way, none of the sounds were loaded and getting hit by anything crashed the game, but hey, it worked!

Heroes of Eterna: Now on IndieDB!

This weekend marks a couple of neat milestones for Heroes of Eterna!
First, we have the creation of the IndieDB entry for it (found here). This is a pretty big step for me as it gets the project out into the real internet world, beyond the confines of this unviewed blog.

Next up we have the first official demo release! I spent the early part of the weekend polishing it up for the masses and have released it, with a fancy new installer! You can find the demo here.

For anyone interested in such details, I used InnoSetup, which is pretty great, to create the install package. For you other XNA devs out there looking for an installer system that lets you conditionally install the XNA runtimes, this couldn't have been easier to set up. I found an excellent InnoSetup script by one Daniel Truong that I only needed to fiddle with a tiny bit to get working. You can find the script here.

Posted by Unknown at 9:03 PM No comments: